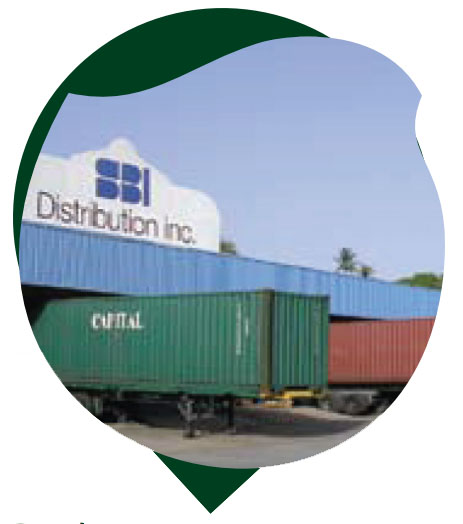 From the tourist on the beach to the rural school teacher, everyone on the island of Barbados gets essential products from SBI Distribution (SBI). The company supplies brands like Nestle, ConAgra, Lever Brothers, and Frito Lay to supermarkets throughout the country, plus health and beauty products like Revlon, Colgate, and Dr. Scholl’s. It imports from the United States, the United Kingdom, Latin American, and Asia, and also exports to other islands in the Lesser Antilles. SBI Distribution is a major player in Barbados’ social and economic development, responsible for a significant majority of the nation’s food imports.

SBI is part of a much larger conglomerate, Barbados Shipping and Trading Company, Ltd. In 2002, SBI was formed through a merger of three sister companies, each of which had its own accounting system. At that time, the newly merged SBI moved to a single 200,000- plus square-foot warehouse site, housing 9,000-plus separate SKU numbers. An integrated business system was crucial to merge the various operations into one cohesive whole.

Standardizing on Sage 300 ERP*
“Our parent wanted all of its subsidiaries to be on the same platform, for easier reporting. SBI, in turn, needed one centralized order-entry system, robust enough to handle our massive transactional requirements from consolidated operations. We also required hand- held technology for interfacing with our mobile sales force,” says André Griffith, information systems manager.

“Although our existing business system claimed to be integrated, it functioned more like a concrete wall,” he continues. “When it crashed, which typically happened in the morning, we couldn’t open to sell, causing us to lose hundreds of thousands of dollars due to lost sales. Thank goodness our Sage business partner introduced us to Sage 300 ERP and its end-to-end applications as the complete package for our business needs. Now, the entire conglomerate has standardized on it to be the software solution that supports its accounting needs.” 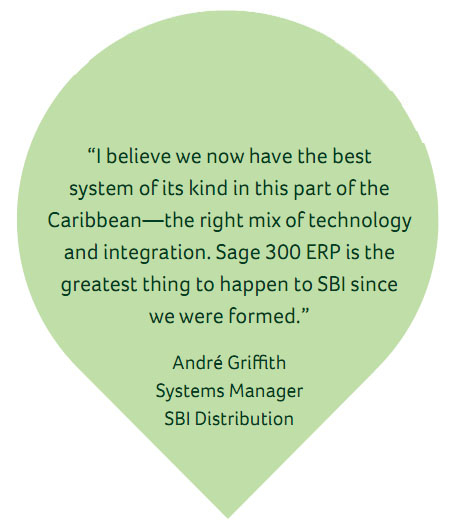 “The logistics are fantastic,” says Griffith. “Credit notes are down by 80 percent since adopting Sage 300 ERP because we’re no longer invoicing what we picked. Instead, we’re invoicing what customers actually receive.”

Faster Fulfillment
The new system also serves on the front end, processing walk-in business at the warehouse as well as top-priority orders. Further savings come from mobile salespeople accessing Sage 300 ERP on laptops and hand-held devices. “Before, salespeople had to physically come to the office to dump order data from their mobile devices at the end of the day,” says Griffith. “Now they can key orders while they’re on the road. This has improved our delivery time by an entire day.”

Supermarket Stocking
SBI Distribution has a sister chain of supermarkets throughout the island. They are all seamlessly integrated through the back end into the Sage 300 ERP system, for streamlined ordering. “An 800-line invoice used to take four people two hours each to key in. Now one person can do the job in only 15 minutes, thanks to the automation with Sage 300 ERP and third-party Quote Manager module. It’s a real blessing,” notes Griffith.

Stocking, done by the customer, is made simple by standardizing on Sage 300 ERP also. “We now deliver orders with an e-copy of the invoice containing bar-code details,” he adds. “If a store has our bar code into their system, they can automatically scan in items, minimizing all the checking they used to do. One scan, and items are ready to receive and sell.”

“Our learning curve was surprisingly speedy. Within three months, all of our accounting issues were resolved, and everyone was up to scratch, thanks to excellent help from our business partner and our internal application support specialist, David Howard,” says Griffith. “Considering the size of our system, the speed of our implementation was almost miraculous. To me, the system paid for itself in the first five months of operation.”

Soon SBI Distribution will activate its Sage 300 ERP Multicurrency module to automate conversion from the many foreign transactions it encounters every day. Griffith describes Sage 300 ERP as providing a “quantum leap” in efficiency. “Our Sage 300 ERP system has put us on the map. I believe we now have the best system of its kind in this part of the Caribbean—the right mix of technology and integration. Sage 300 ERP is the greatest thing to happen to SBI since we were formed.”