“For value and service, it’s Ed Morse, of course!” Throughout Florida and part of Alabama, car shoppers know the jingle of the Ed Morse Automotive Group, one of the region’s most successful and enduring dealerships, and they visit an Ed Morse dealership when they’re in the market for any of his 14 different brands.

It all began in 1946 when Ed Morse founded a small rental fleet that merged with National Car Rental and grew to be NCR’s largest licensee. Ed Morse Chevrolet in Lauderhill, Florida, has sold more cars than any other Chevrolet dealership in the world. Ed Morse has been a Cadillac Master Dealer for the past 21 years. The family-owned and -operated company now has 18 dealerships and employs more than 1,400 people.

Smart Software for Superior Service
Morse Operations, the corporate office for all 18 Ed Morse Automotive dealerships, prides itself on superior quality service to its clientele, but this became increasingly problematic with an accounting system that belonged in the days of the Model T.

“We relied on a manual set of books for years and then moved to some sort of PC-based software,” explains Mike Kelly, corporate controller. “But it was so inadequate that acquiring a good business system became a major concern of our CFO at the time. His criteria included ease of use, flexible reporting options, sophisticated tracking of historic records, and the ability to handle the eight different companies that make up our enterprise.”

Cadillac of Computer Systems
Morse Operations selected Sage 300 ERP* as its enterprise management system in 1996 and has been using it to run all eight companies that comprise the business ever since. The firm has consistently upgraded as new editions became available. In fact, it plans to upgrade its server in the near future to take advantage of new capabilities in the latest version of Sage 300 ERP.

Over 1,400 accounts must be managed and incorporated at the end of each month in the Morse Operations general ledger. “Sage 300 ERP makes it simple to summarize everything to three balance sheets, three income statements, and three expense reports. This is a total of only nine pages, making for a very manageable bird’s-eye view of the company’s financial position,” Kelly says.

Challenge
Existing accounting software was incapable of managing the eight companies that form Ed Morse and could not create adequate financial reports and track historical data.

Solution
Sage 300 ERP with full suite of financial modules, for robust, scalable, and fully integrated system to manage all aspects of this complex dealership. 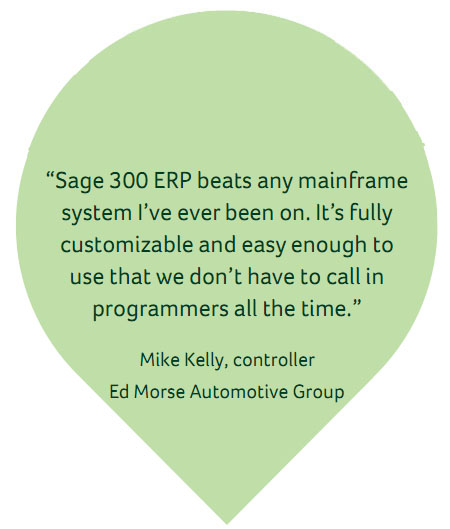 Revving Up Reports
“The primary value of Sage 300 ERP for us lies in its ability to prepare customized and comprehensive reports. We created an individual chart of accounts for each store, including a separate balance sheet and income statement. We were able to do this easily ourselves,” notes Kelly.

“Other reports we create regularly include comparing this month to the same month in the prior year, and similar comparisons with year to date,” he continues. “Our variance reports have proven to be extremely useful. Also, we have five full years of historical data at our fingertips. Dealerships with mainframe systems have only two years.”

Using the Accounts Payable module, Morse Operations runs payables in batches several times a week and can extract information whenever it likes. The module also creates 1099 reports for vendors at the end of the year.

Doing More With Less
Like many other companies across the country, Morse Operations has experienced the effects of downsizing. “We are able to do much more with less because of having Sage 300 ERP. Over the past two years, we have reduced our administrative staff by nearly half. However, we have been able to maintain high levels of service because the software makes us so efficient.”

By adding Optional Fields to its Sage 300 ERP system, Morse Operations has enhanced the descriptions it maintains for each ledger entry. Optional fields also track who authorizes each transaction in accounts payable.

Move Over, Mainframes
“The seamless interface between modules in Sage 300 ERP is really helpful. Most problems have been due to user errors. If this occurs, it’s easy to go back into the software, unlock a specific period, open up a batch, make corrections, and create new financial records,” Kelly notes.

Many large dealerships use mainframe business systems. But Kelly says he has everything he needs right now with Sage 300 ERP, saving a minimum of $1,500 a month over a bigger platform. “Sage 300 ERP beats any mainframe system I’ve ever been on. It’s fully customizable and easy enough to use that we don’t have to call in programmers all the time. Also, because of being on a PC platform, I could work remotely at home if I wanted.”